This is real local democracy in action. We know that in fact “all” politics is local. Anyone interested in how their local representatives will perform on business and “employment” issues should attend before they cast their vote on Friday 23rd May. Congratulations to Pat Whelan, Mullingar Chamber President for arranging this on behalf of the Chamber’s members and it must be said, fair play to the candidates for agreeing to take part. Open to the public. Click pic to enlarge, or click here to go to Chamber Website 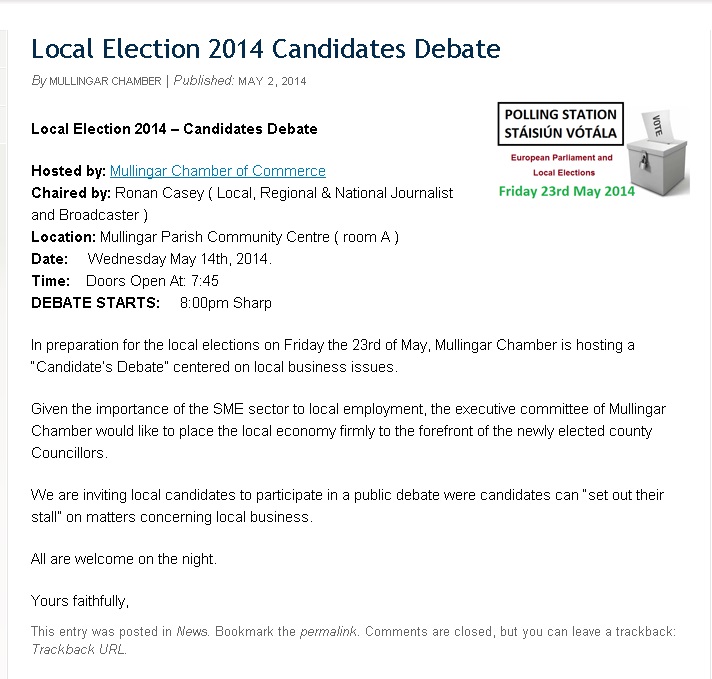 Back in the dark old days of 2009,  media commentators and politicians who knew the arse was really falling out of the country used to make light of it all by using the acronym WAWWA – we are where we are. [Funny how they have stopped using that these days]. What’s so funny is that it would be more in their line [de meeja’s that is] to be now revisiting the situation and attempting to draw positive conclusions as to where we actually are right now (April 2013). Admittedly it’s never easy to see a particular connection between the everyday real economy in which most of us lives and the economy which George Lee, David Murphy in RTE and others inhabit and commentate on. But it’s certainly tempting to think that what’s going on at the moment in the ISEQ index of Irish Shares will have to have some positive significance for the year 2013 in the broader sense.

Here we can see that in March the graph just broke through the 4000 mark for the first time in 5 years. And if you’re not yet convinced about any cause for optimism in this chart, maybe it’s the next pattern which will have more resonance for you. Because it is a real fact that when the ISEQ started tumbling from it’s dizzy heights of close to 6500 in 2008, that’s also when all this pain started to properly effect us in the real economy. The link is therefore proven in this very real-life example which most of us remember only too well. Even the most hardened sceptic of lies damn lies and statistics, eg me, would have to concede that in the medium term this recent upturn  now represents more good news for the Irish economy, than bad. We are where we are, luckily.